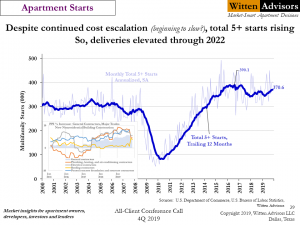 Excerpt from the 4Q19 Witten Advisory:  With development capital still flowing, starts have accelerated in the past several months, as seen in the above chart.  Total 5+ starts topped 370,000 (trailing 12-month total) as of November – the highest in two years, but still short of 2016’s peak.  Production has increased even though construction costs continued to climb faster than rents.  The inset graphic showing Producer Price inflation does point to a slowdown in the last couple of months, though.  Perhaps this is a turning point in the cost cycle, or perhaps year-year comparisons are easier now, with tariffs in place a year ago as well as today.  However, the construction trend is clearly upward.